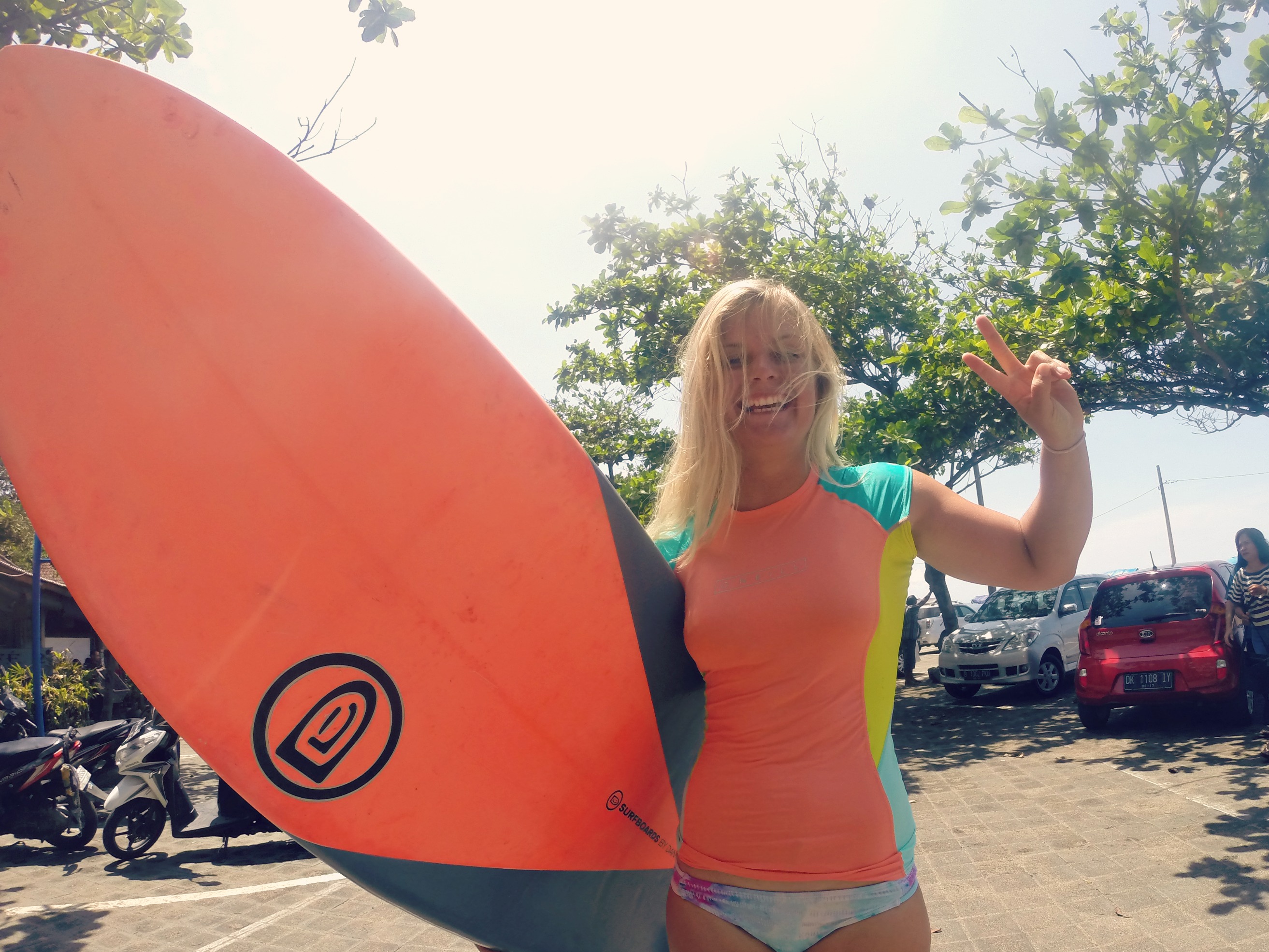 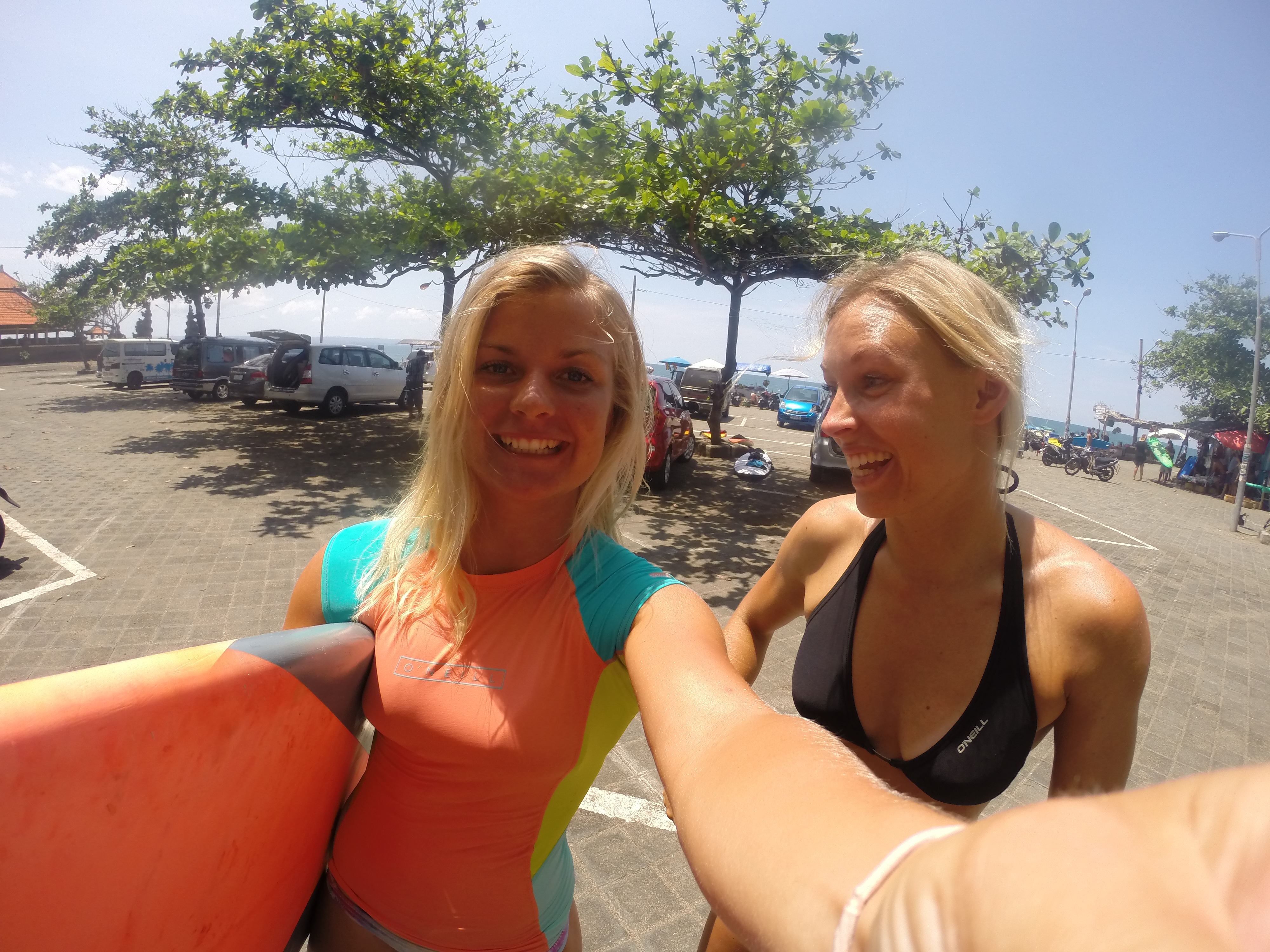 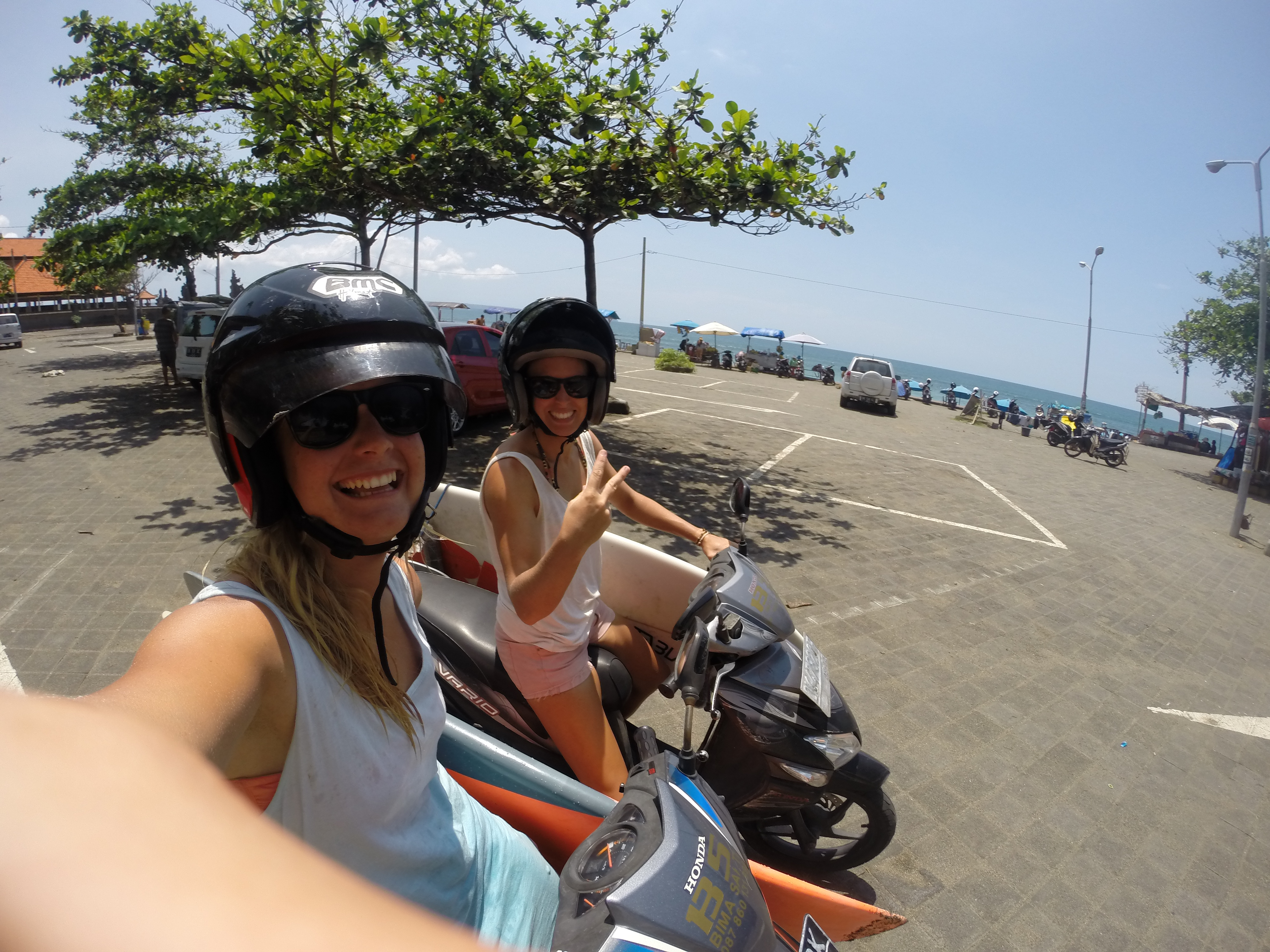 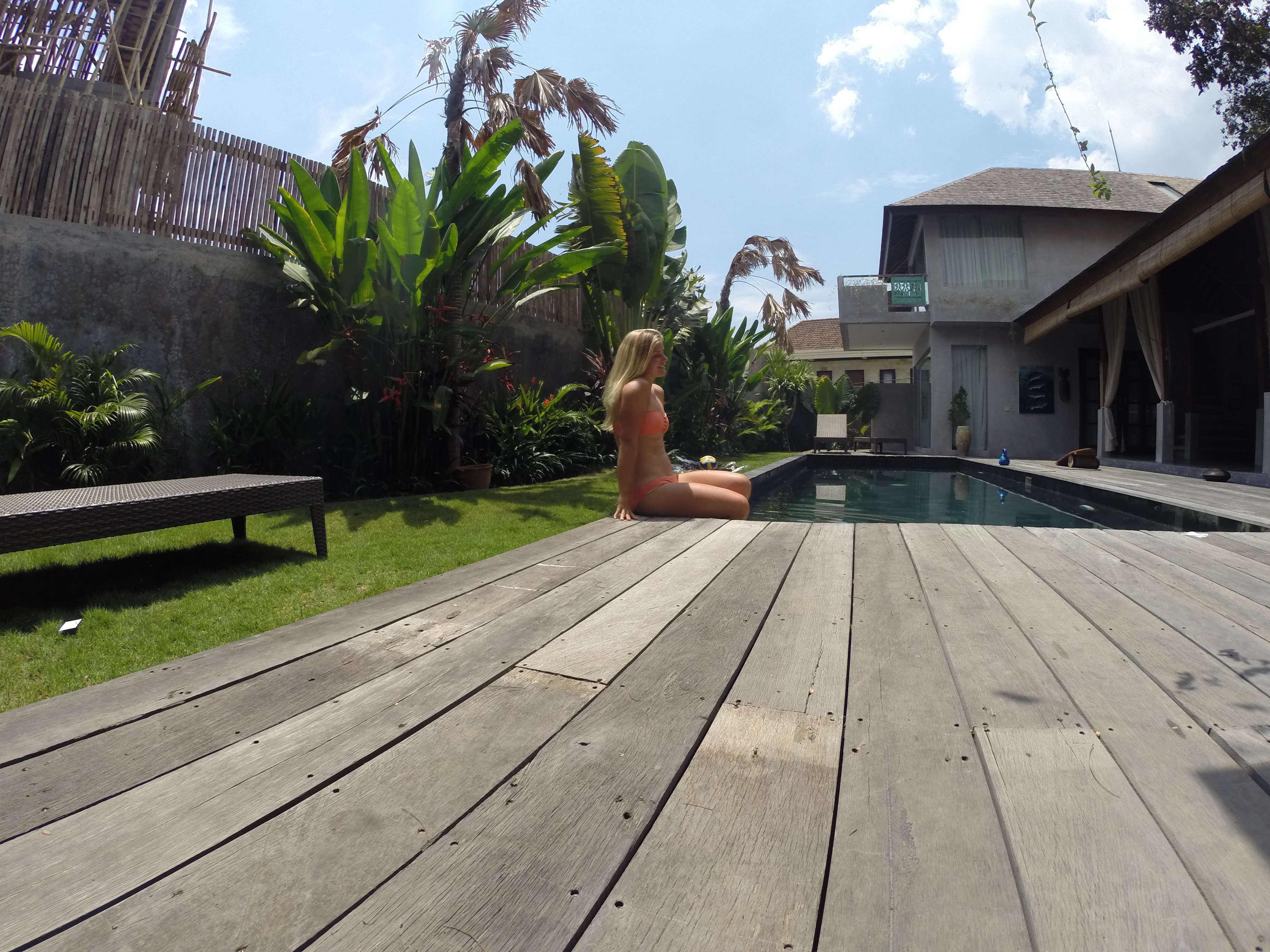 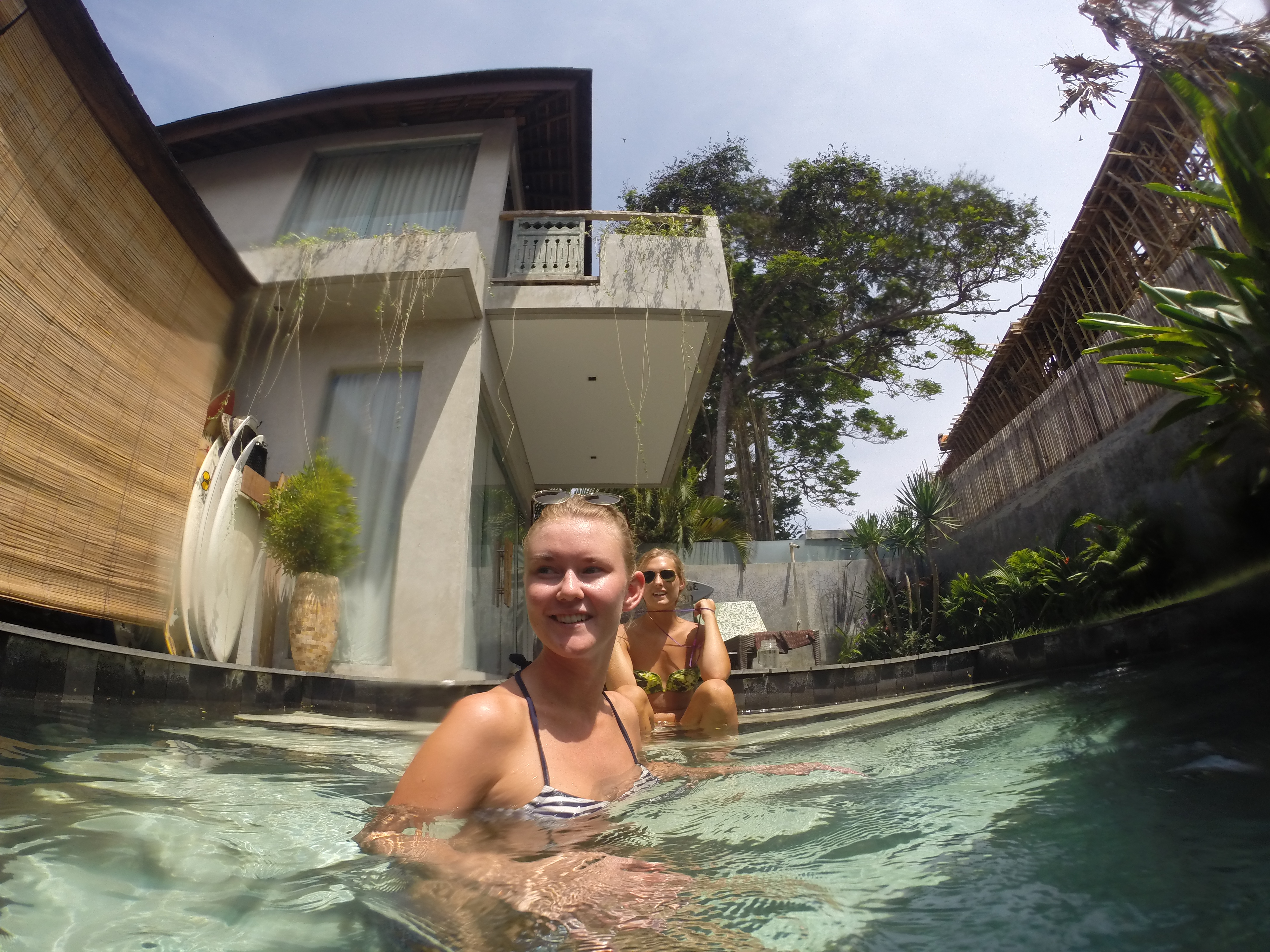 “Taxi, miss? Taxi yeah? Where are you going, Taxi?”

As I dragged my massive board bag through the airport and covered a yawn with my hand about a million taxi drivers were fighting each other to take me to my destination. As the time display on my phone was showing 2.30 am and the message “no service” was flashing across it I made my way towards the back of the people eagerly searching for the one person who would bring me to the fluffy pillows and the dreamy white sheets that was the one thing on my mind. All of a sudden I saw my name on a sign and, as my eyes traveled upwards, two rows of smiling teeth greeted me: Ketut! Even at 3 am the cheerful driver was chatting happily and telling me all sorts of gossip as he loaded my board bag into the welcoming air-condition of the minivan and started zigzagging through the Balinese traffic. By 3.30 am I reached my goal, thanked Ketut and crashed out as soon as my head hit the pillow.

The next morning I woke up with butterflies in my Stomach and went outside to be greeted by a house already full of movement. Surflodge Limasan looked even better than I remembered with the big lofty spaces, dark blue pool and the little palm-trees that Gabbe had planted when I was here last was now a full blown jungle full of colors and flowers. The rest of the house had already been awake for an hour as they had a morning yoga class and now they were all getting ready for breakfast. I took my seat and sipped on a fresh mango juice while listening to the chat about where the best surf would be today. Before I knew it was was sitting on a scooter, a board strapped to the side of it and heading for the long white beaches for my first surf in almost 10 months!!

Surfing is so much harder than wakeboarding and I have so much respect for the ocean after getting crushed so many times in the impact zone. The waves were pretty big but also really nice and round so I caught quite a few and after a few hours when my arms stopped working even though I tried to encourage them to “Come on, just one more wave” I had to reluctantly give up and paddle to shore with a big smile across my face. After a BBQ dinner back at the house and a bit of worry on how I was supposed to get out of bed the next day I fell asleep with the same smile on my lips. It’s going to be a good end to the year! 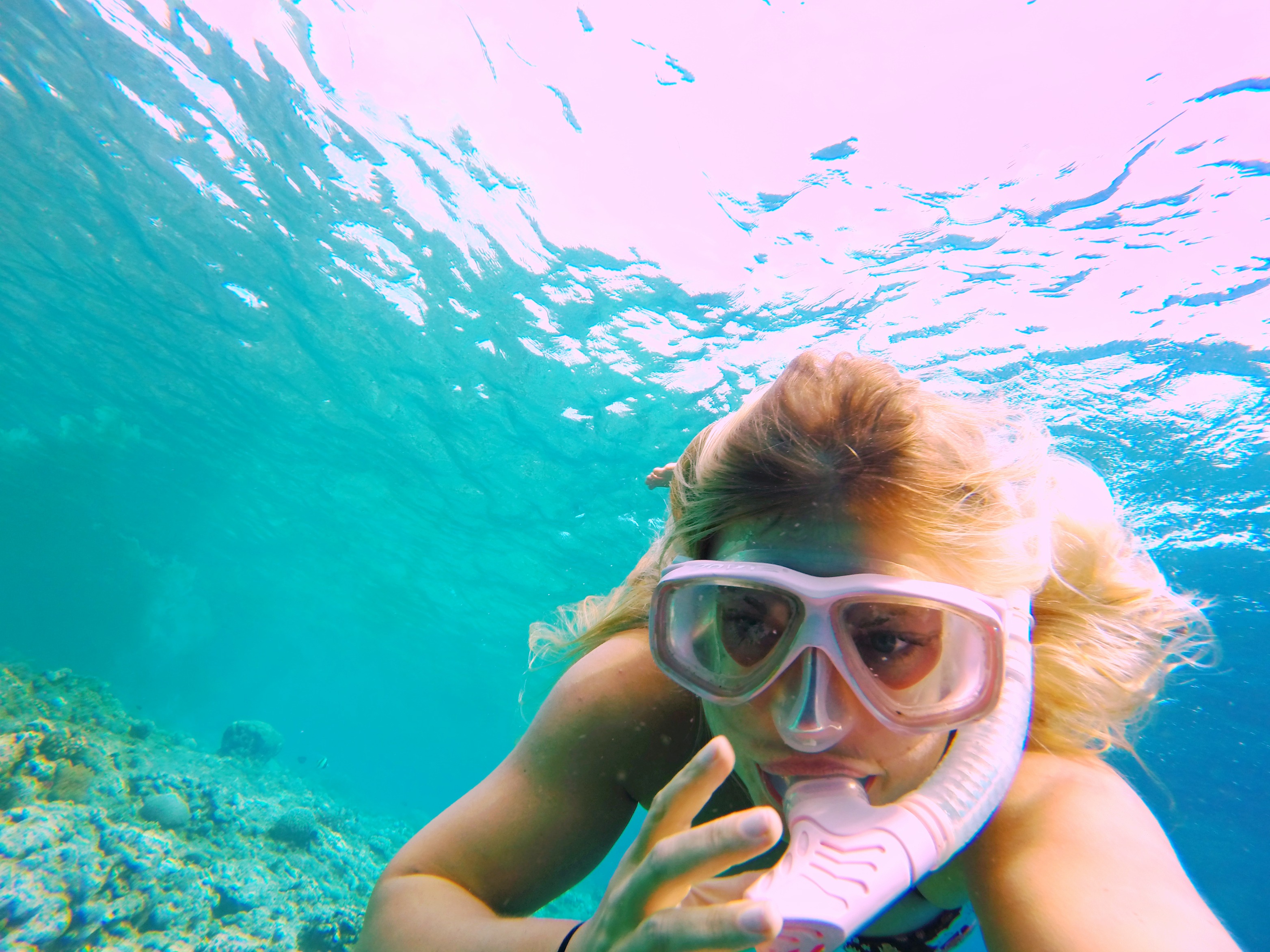 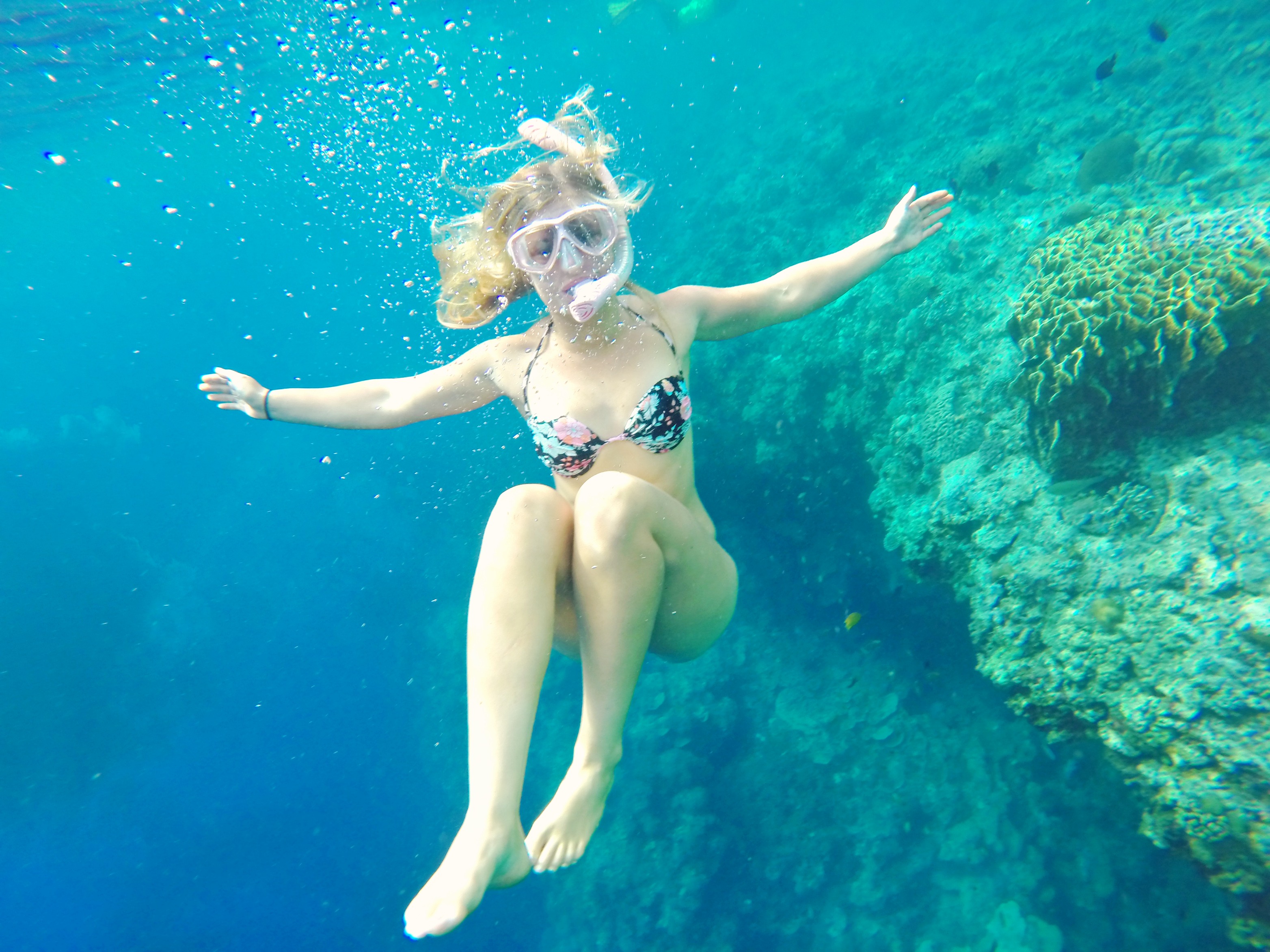 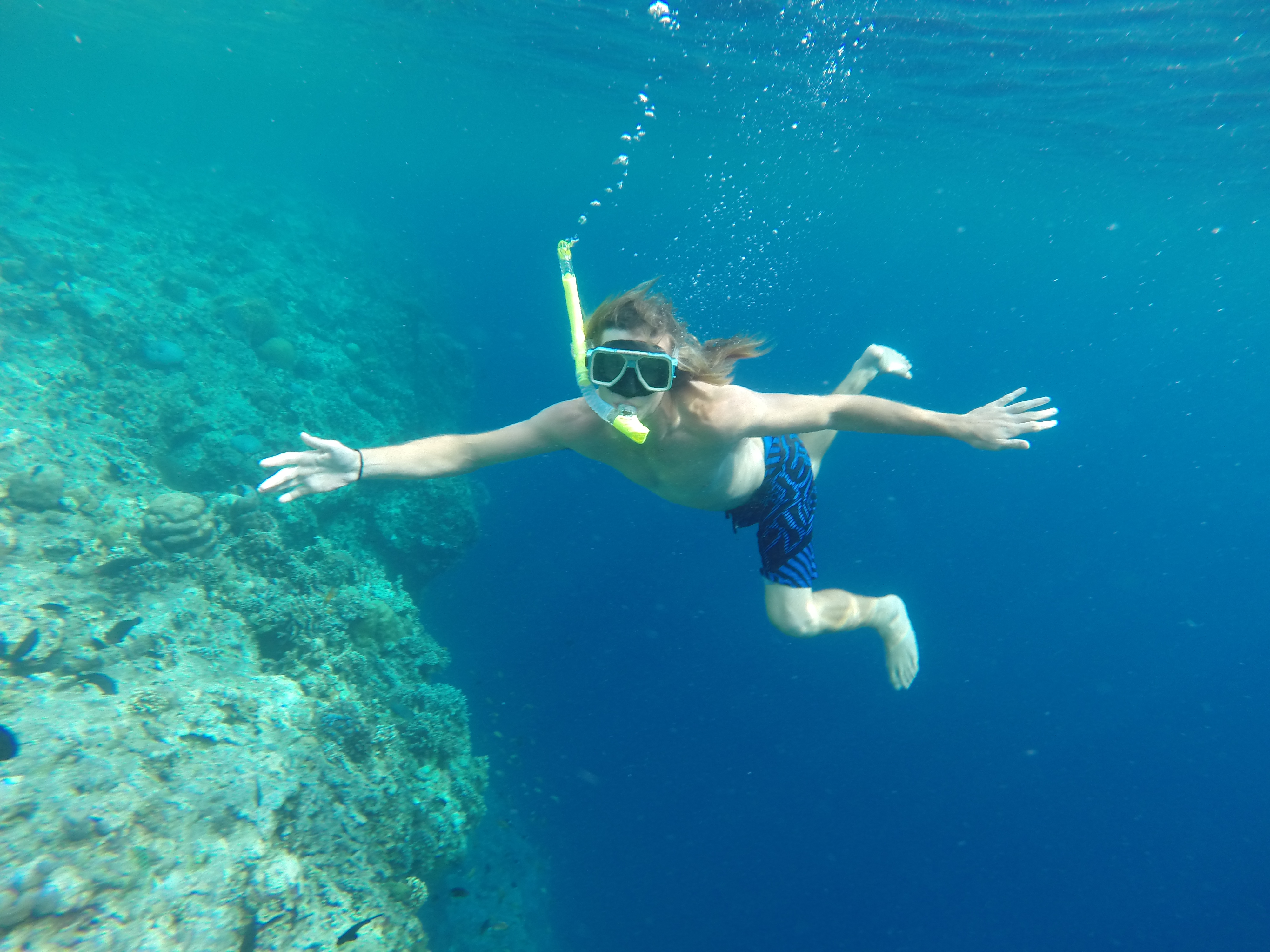 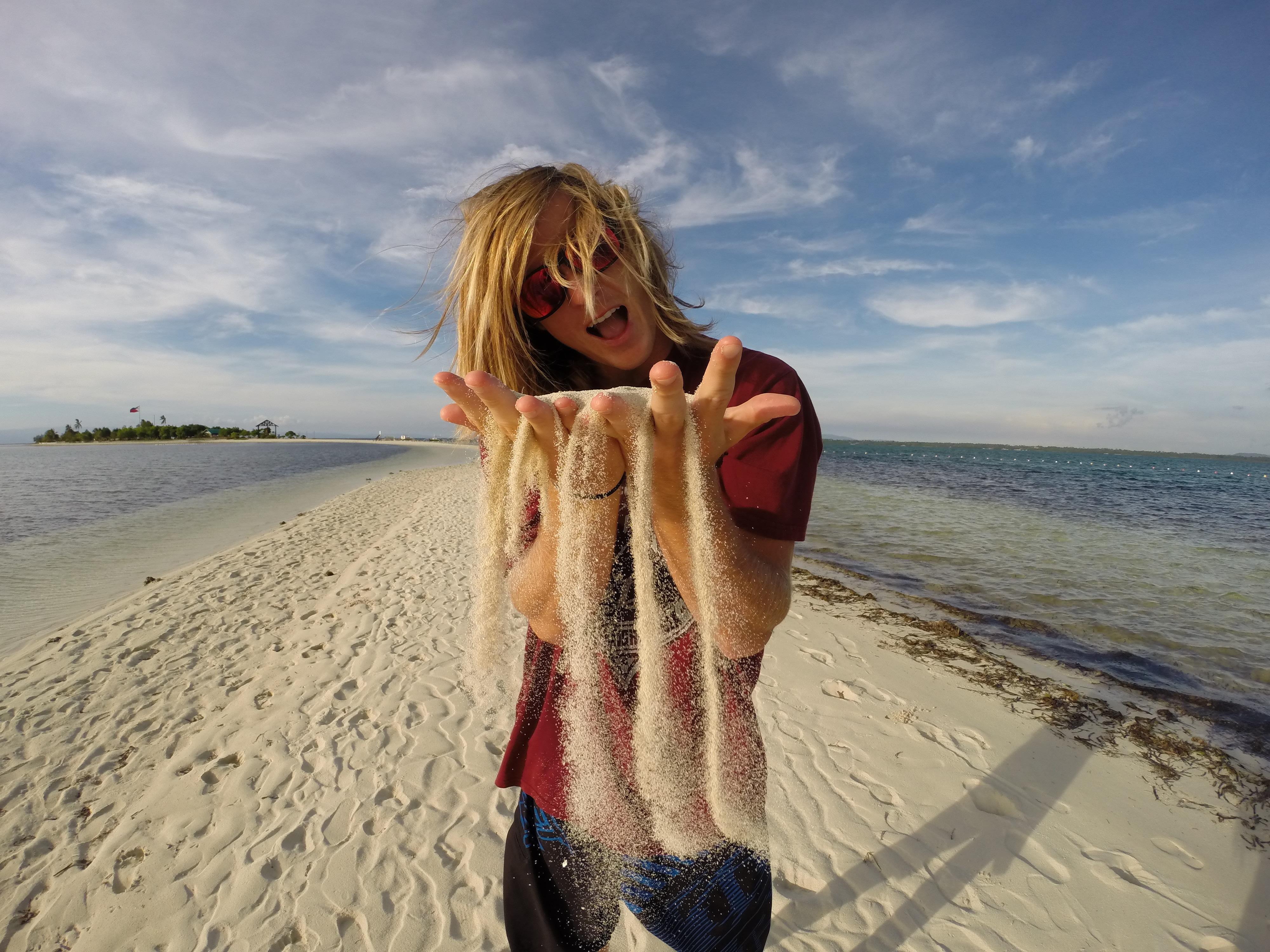 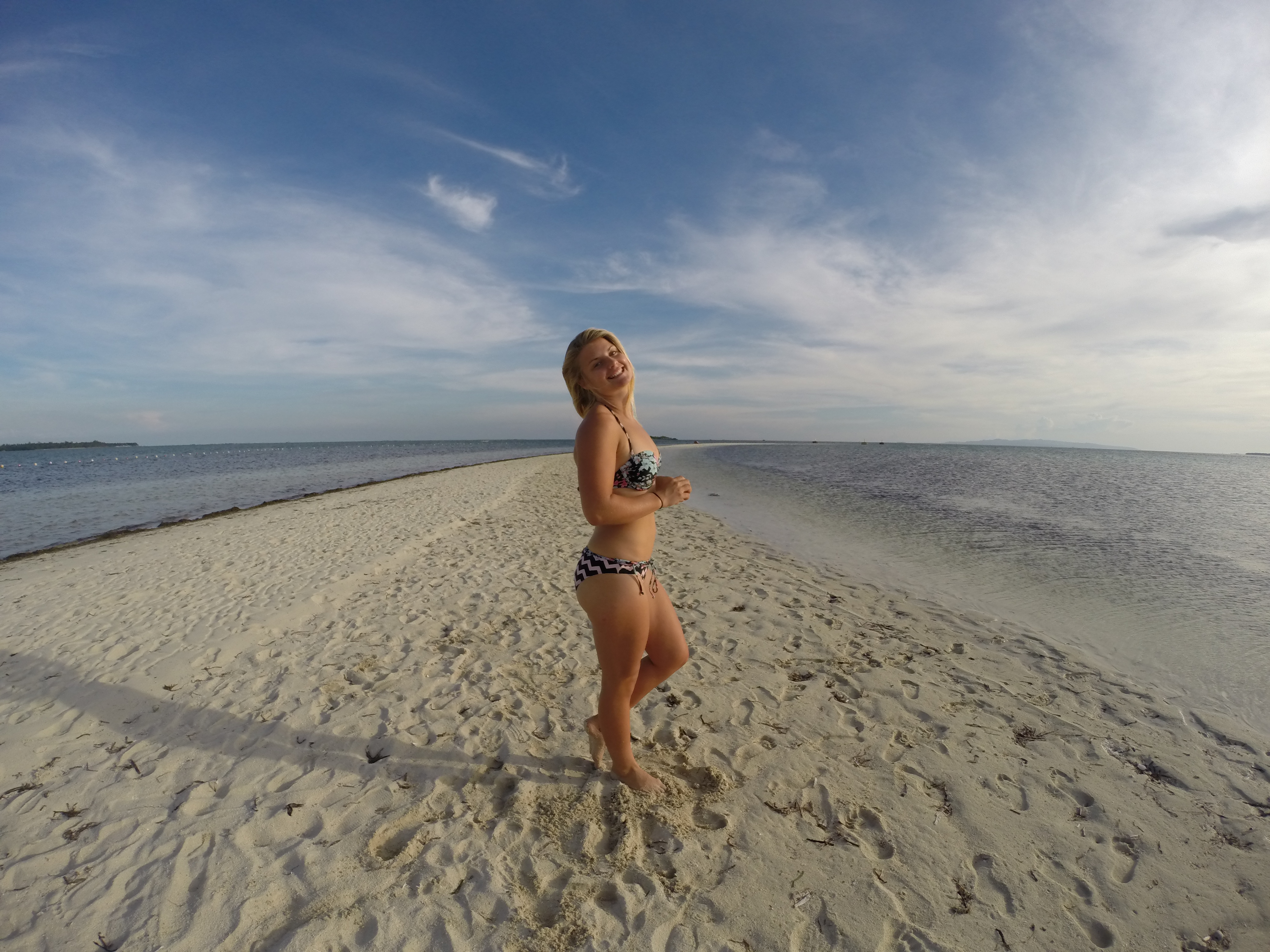 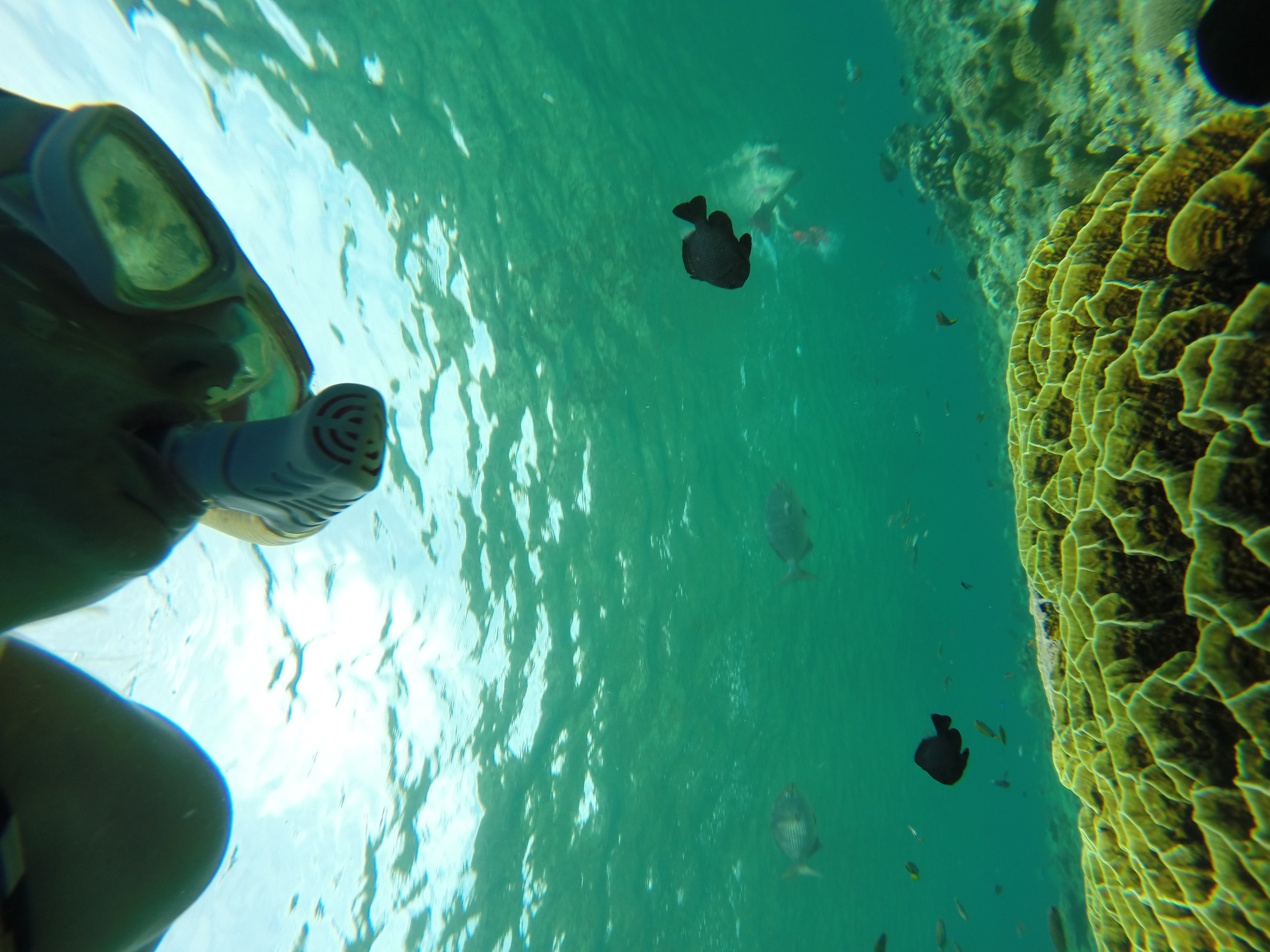 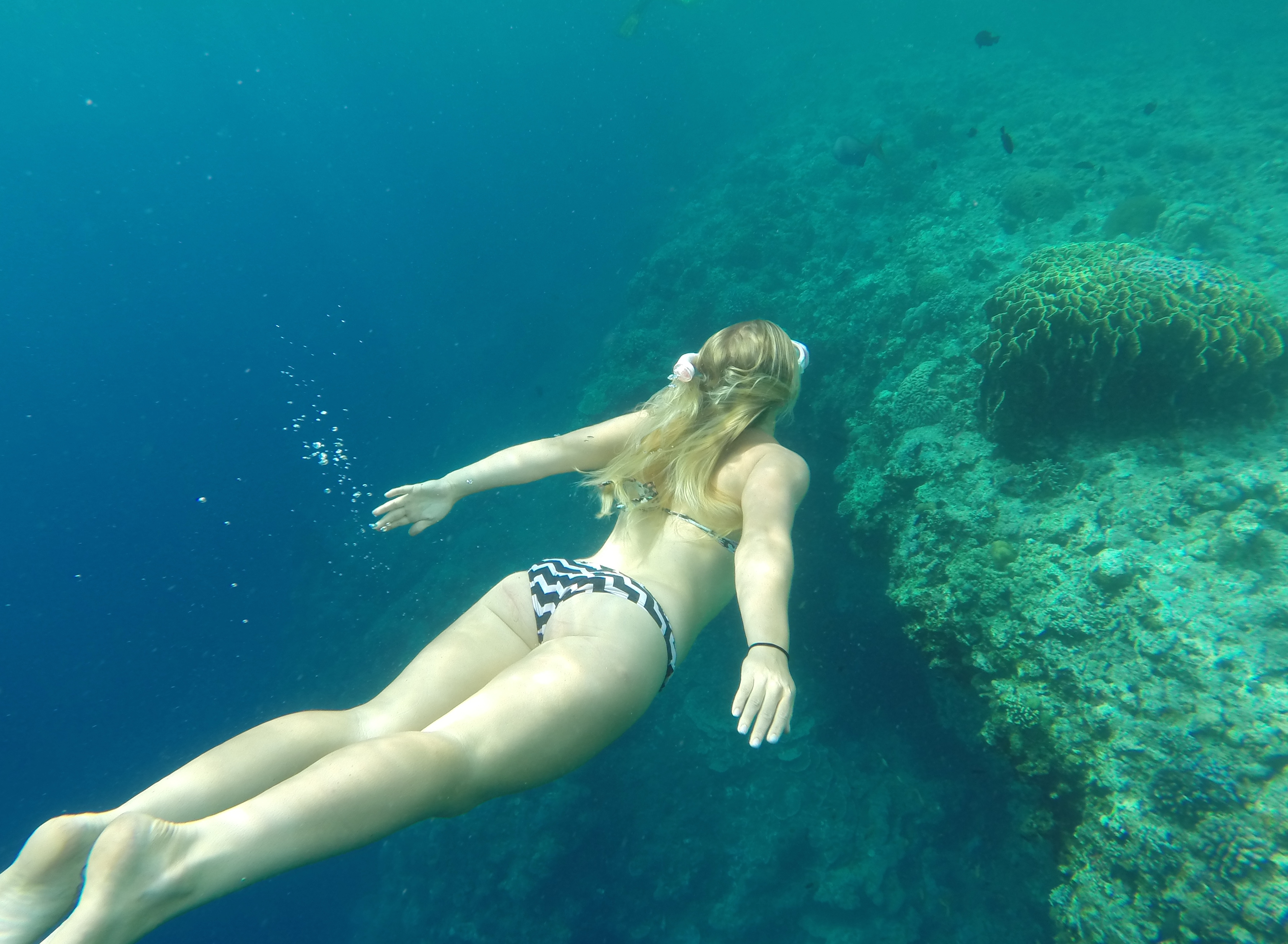 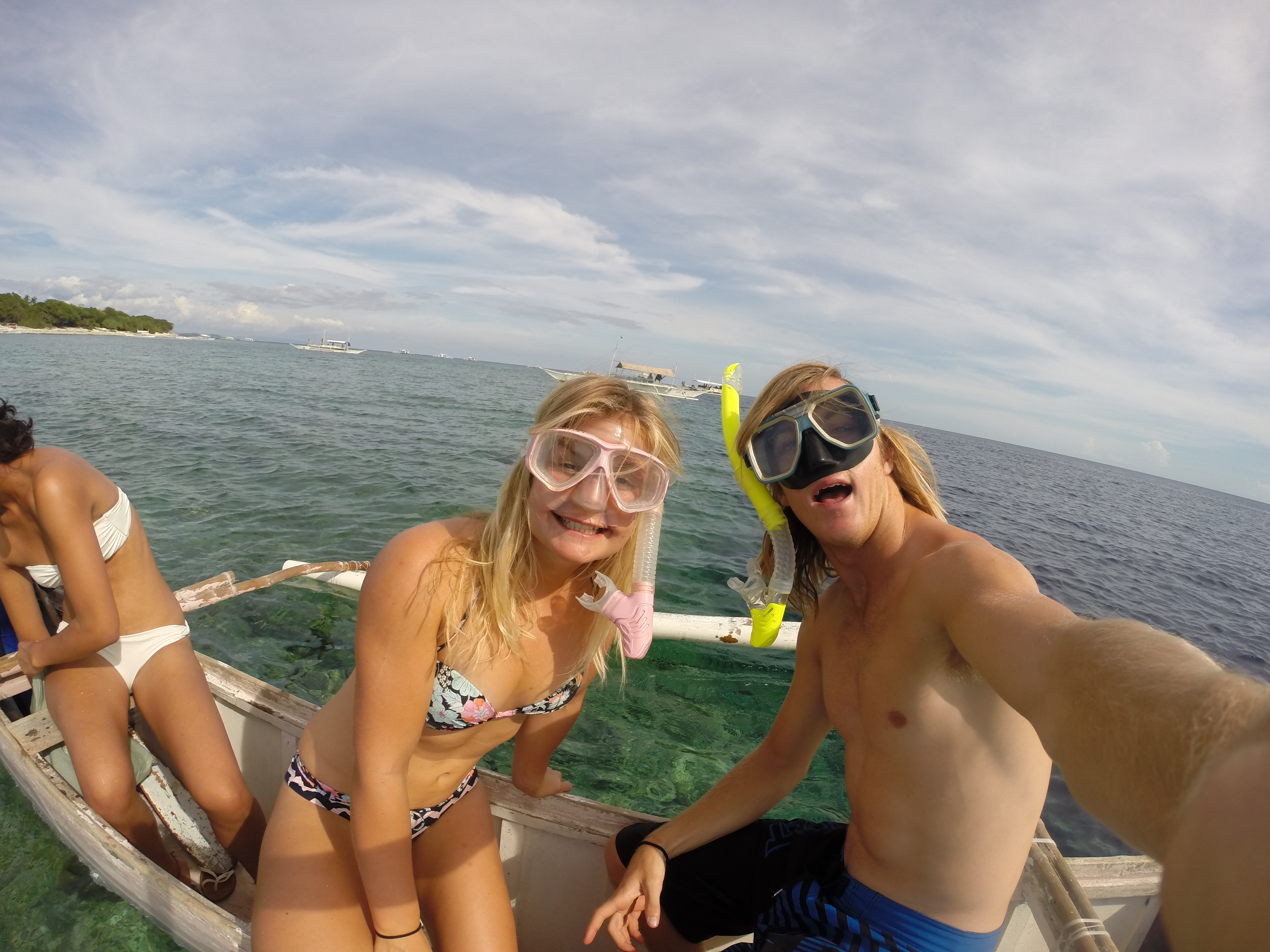 I think one of my favorite things to do besides wakeboarding is diving. I don’t have my divers license yet so for this trip I had to settle with snorkeling (even though I am planning on getting my license at some point). I love the colors, shapes and sounds you experience under water. This trip was a bit of a surprise to me as when we got on the boat at Panglao and headed about 45 minutes off the coast to another island with white beaches, palm trees and crystal clear water. The island looked like out of a movie and after smashing a coconut we headed out for our snorkeling adventure. Seeing right through the water as we came into the island I felt a little disappointed as the snorkeling looked pretty average but I was still stoked to get into the water as the sun was blazing and making me super hot. Imagine my surprise when I discovered that we’d been taken right to the edge of a big reef and the world which opened up beneath us was like being in outer space.

The pictures we took doesn’t nearly do it justice  as we were too busy diving down to look at the starfish, corals and we even saw a giant sea turtle! After spending two nights on Panglao at a hotel overlooking the ocean and ripping around on a scooter we’ve now moved on to Manila and Republic Wake Park. After two solid days of riding my muscles are screaming and I can barely get out of bed but it feels so good to be back on my board. Even though I love surfing and diving and chilling on the beach, nothing comes close to Wakeboarding 😉 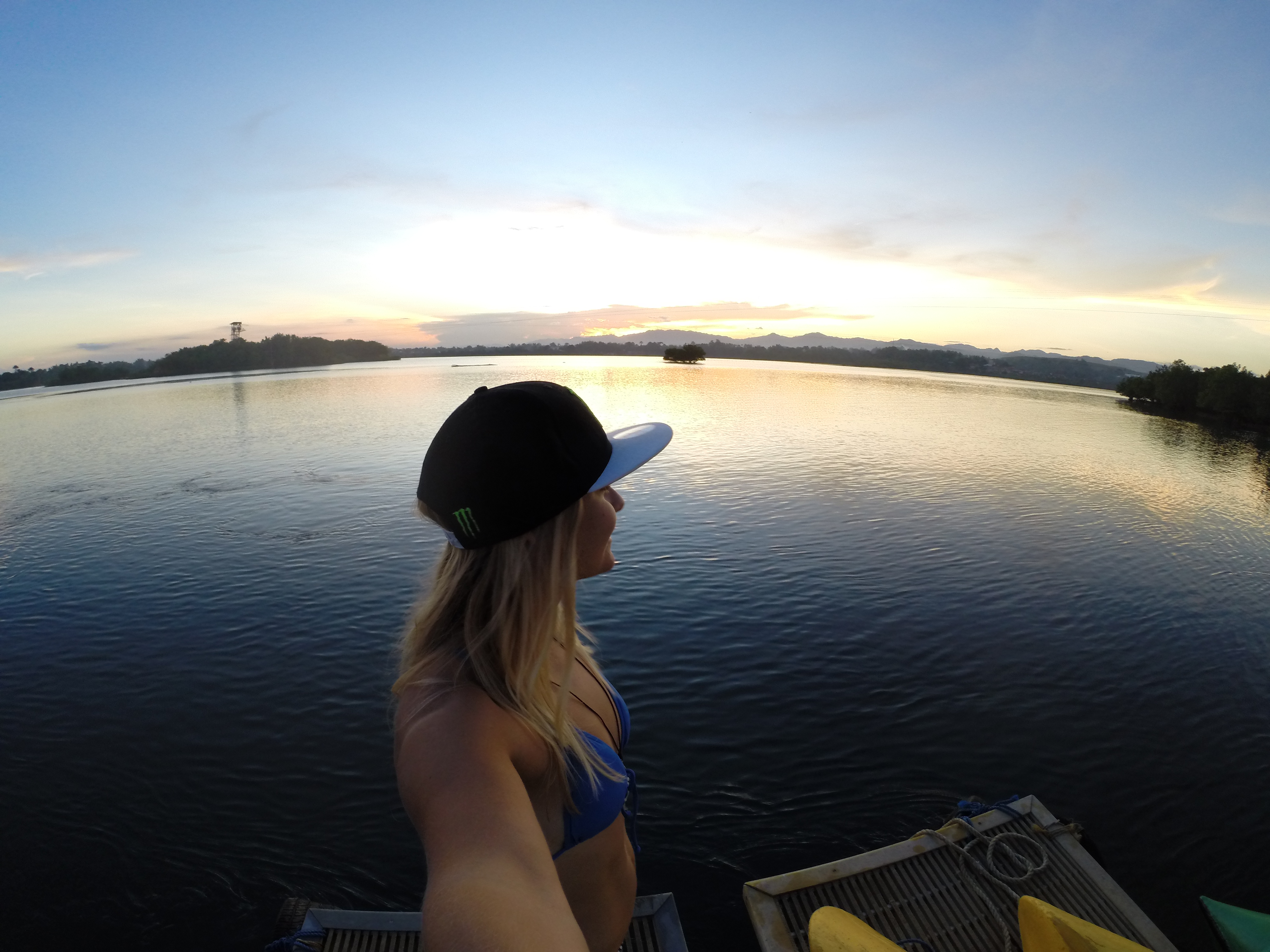 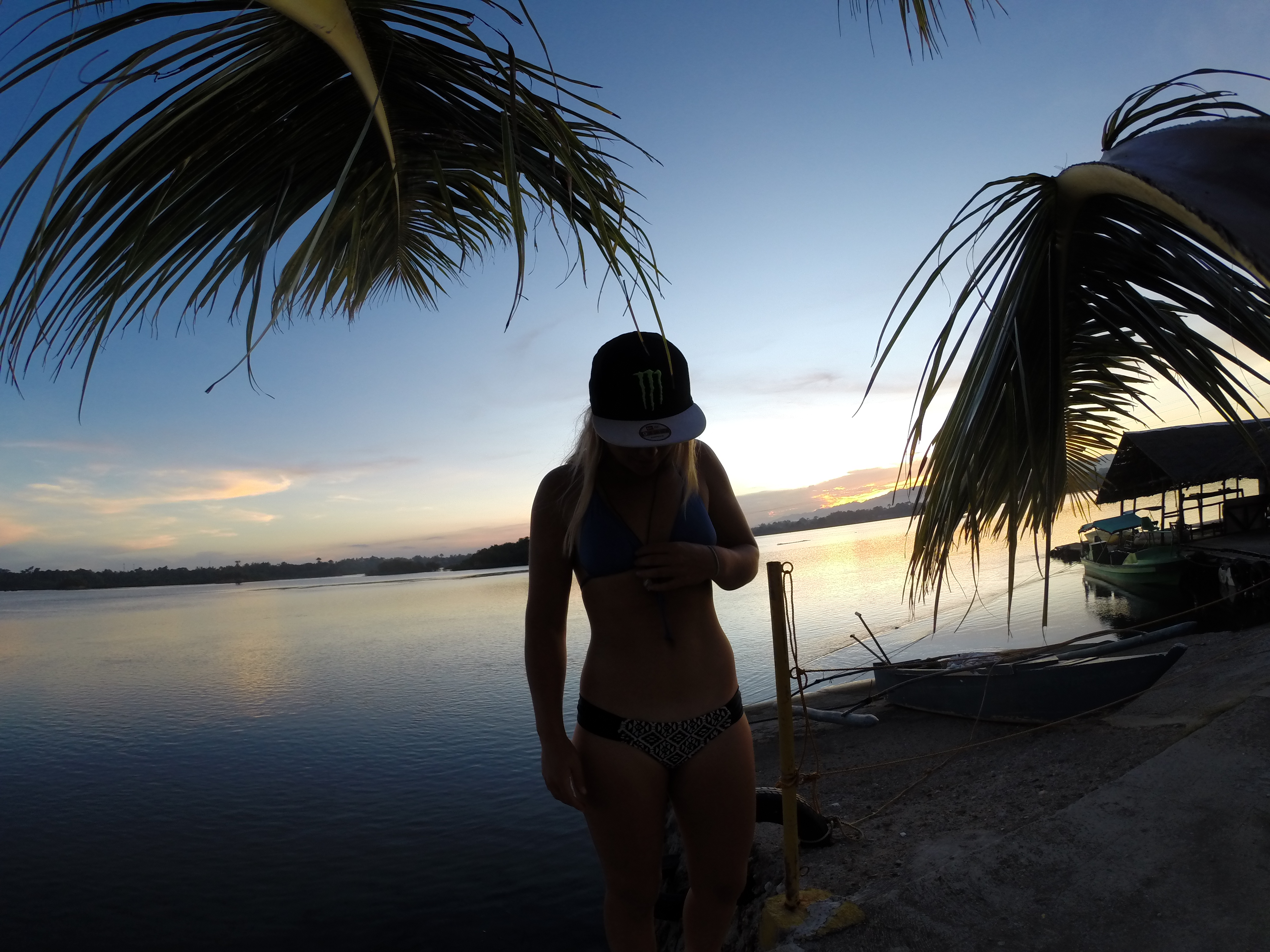 Having a very interesting trip here in the Philippines! So much has happened but unfortunately I do not have a lot of Wifi to tell you about it so the stories will have to wait. After a couple of days shredding with JB O’Neill at Cebu Wake Park I am now drinking coconuts on a beach on Panglao Island. More updates to come soon but everything is good! 🙂 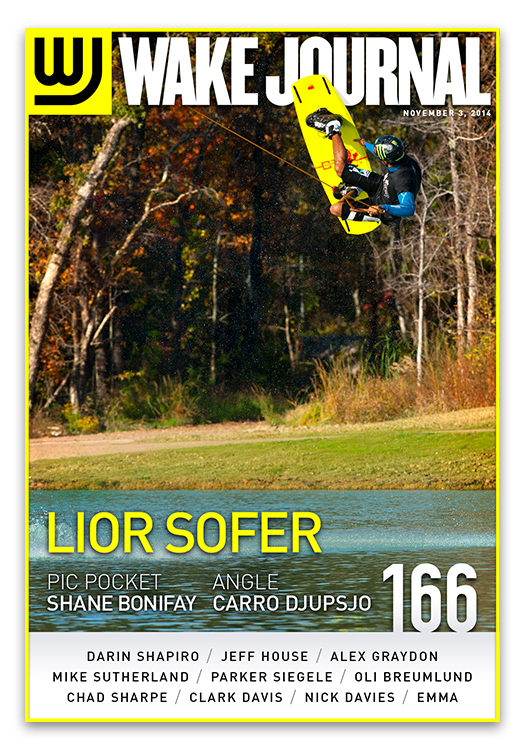 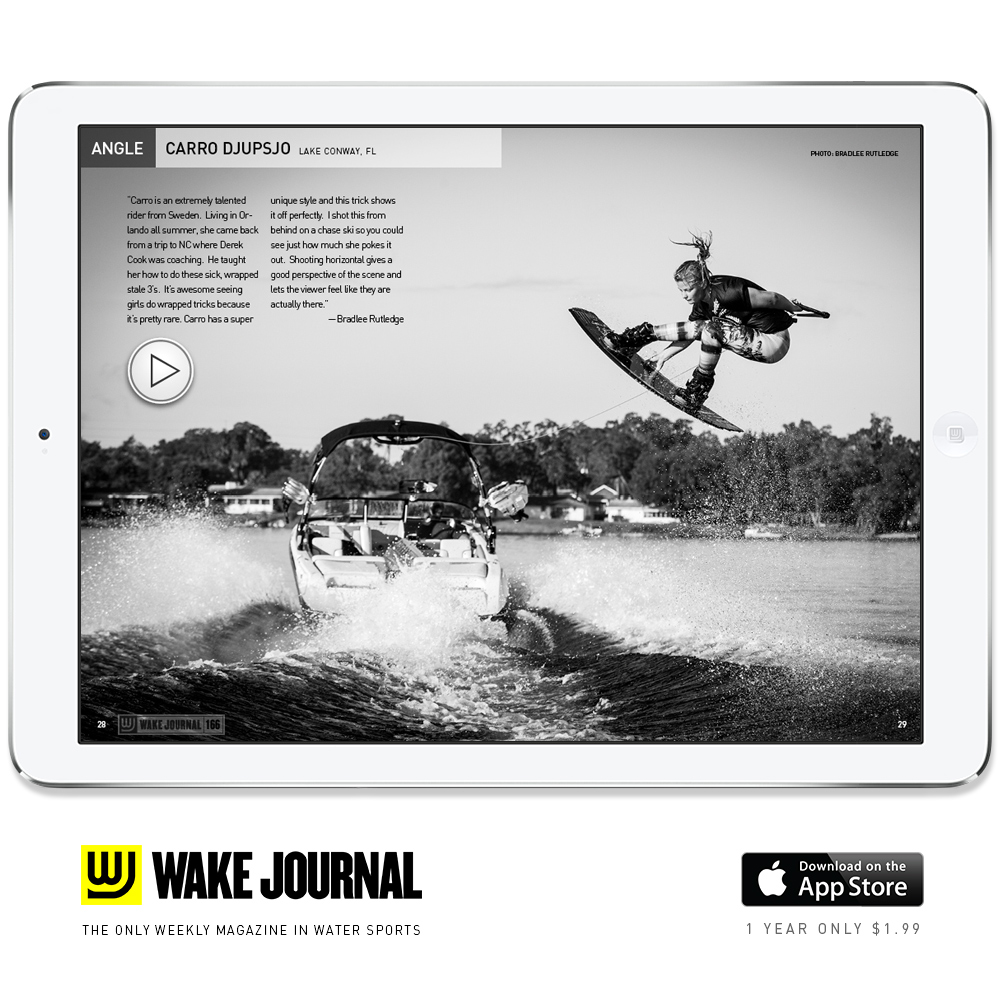 So excited to be this weeks “Angle” in Wakejournal with this shot my friend and very talented photographer Bradlee Rutledge took this summer back in Orlando. So excited for my friend Lior to get the cover too!

Get the app and read the issue here: LINK

It’s now been one week since I returned home from the Europeans in Portugal. The trips we do with the national team Sweden are some of my favorite ones as it brings us all so close together and it is so nice to have the support of your friends and whenever you are competing. It makes all the difference knowing that weather you will end up crying or laughing there will be people there to share your feelings. This years Europeans consisted of all these emotions and I think maybe thats why it’s taken me so long to write about it. I had to unwind and let my thoughts calm down before composing this blogpost. 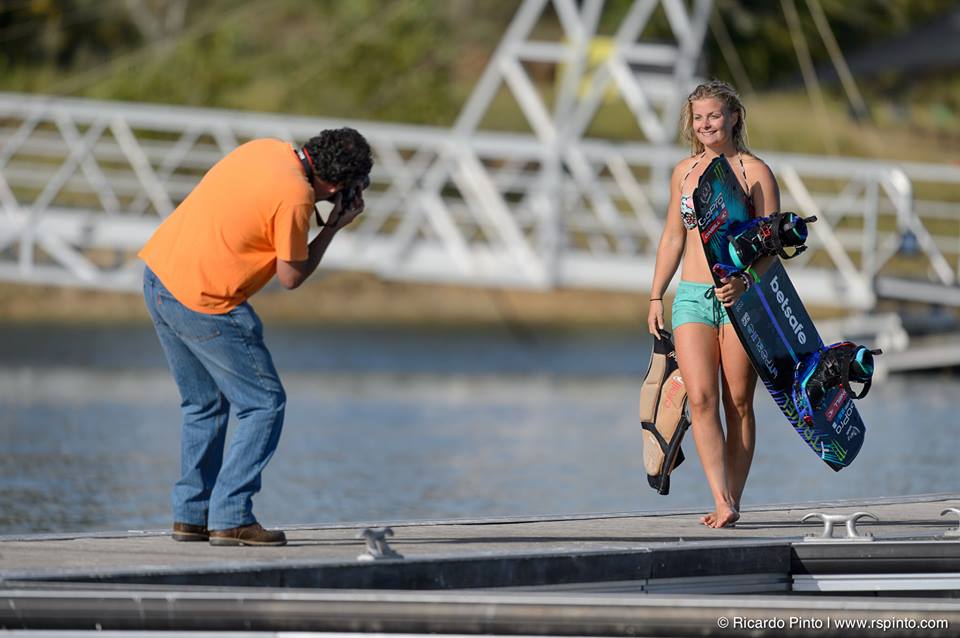 Arriving to Portugal with team Sweden was one hell of a journey from planes being delayed to rental car companies messing up and then we ended up in a mini-bus bouncing up and down at 11 pm in the middle of nowhere in Portugal traveling towards what we hoped was the site and little village of Montargil. After making the journey from the airport to the hotel in 50 minutes (instead of the recommended 1h 45) we all hit the hay to get ready for practice day.

Most of my team-mates had never ridden behind the 2014 X-star which the competition was run behind so we were all pumped on trying out the wake in the sunshine of Portugal. The team rode extremely well and we all had a great day which got even better when we got to relax in our private pool by our villa for the week. You could tell the whole team, including myself, were a bit nervous about the qualifications the next day though and we all called it an early night. 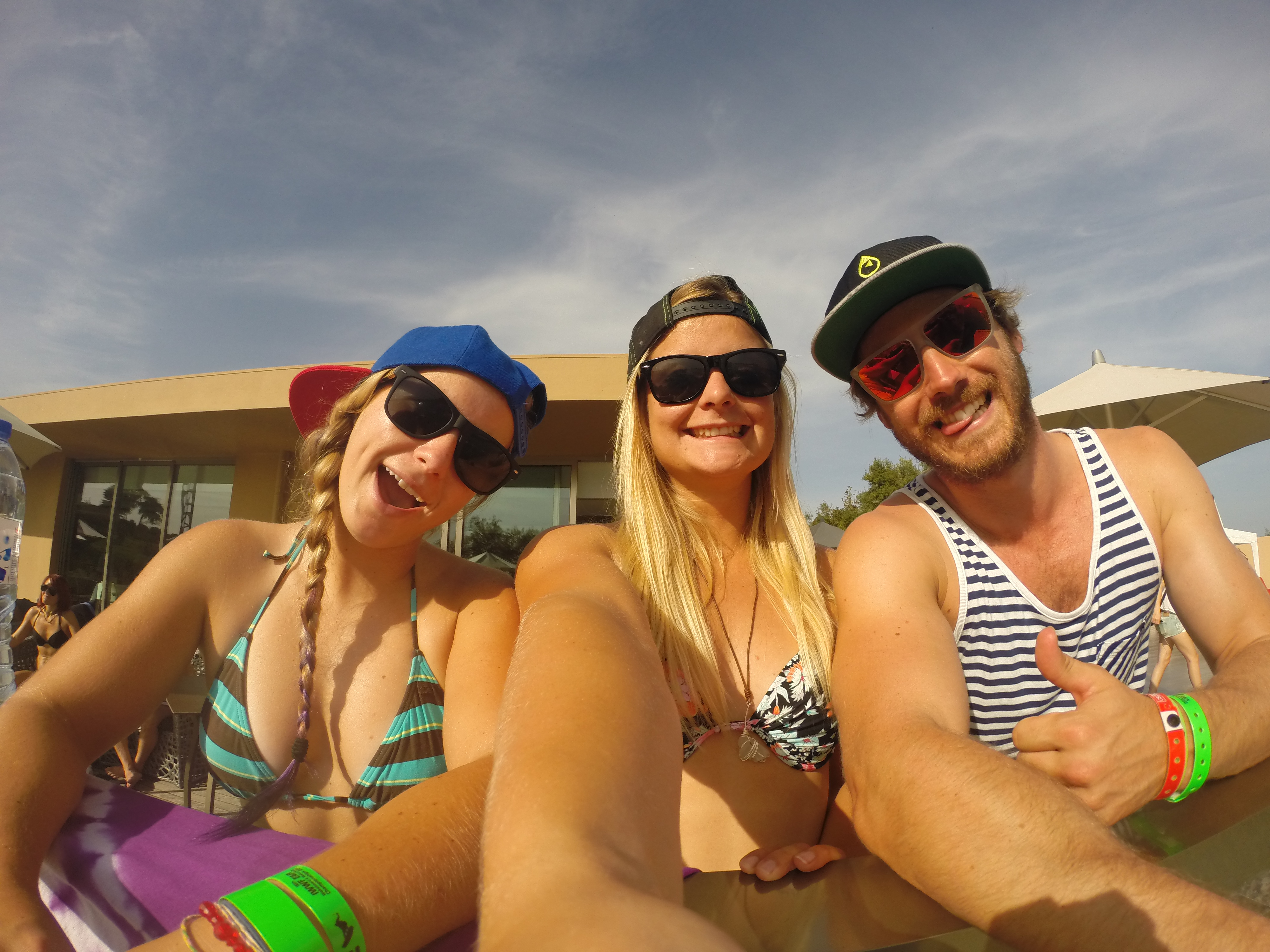 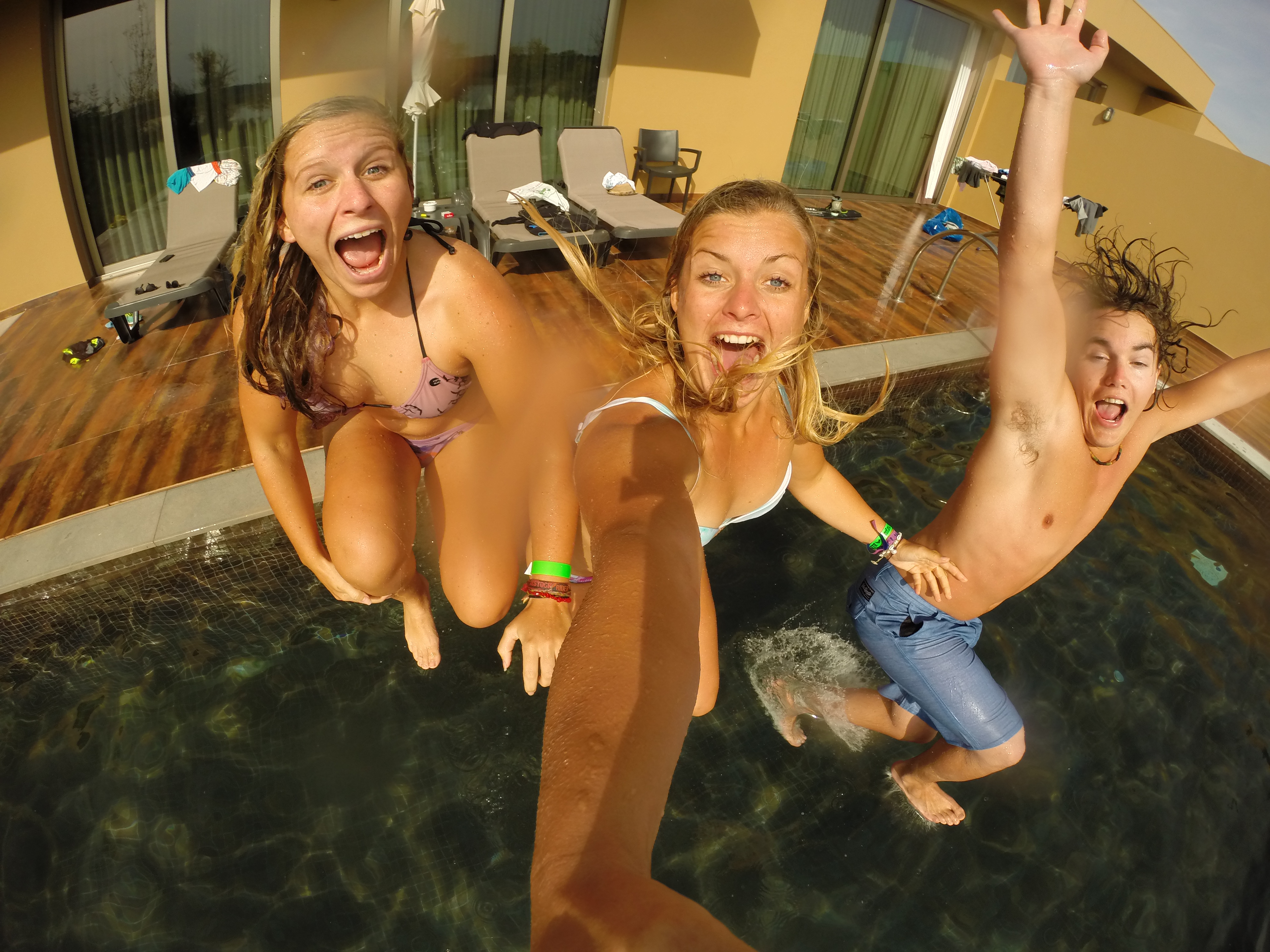 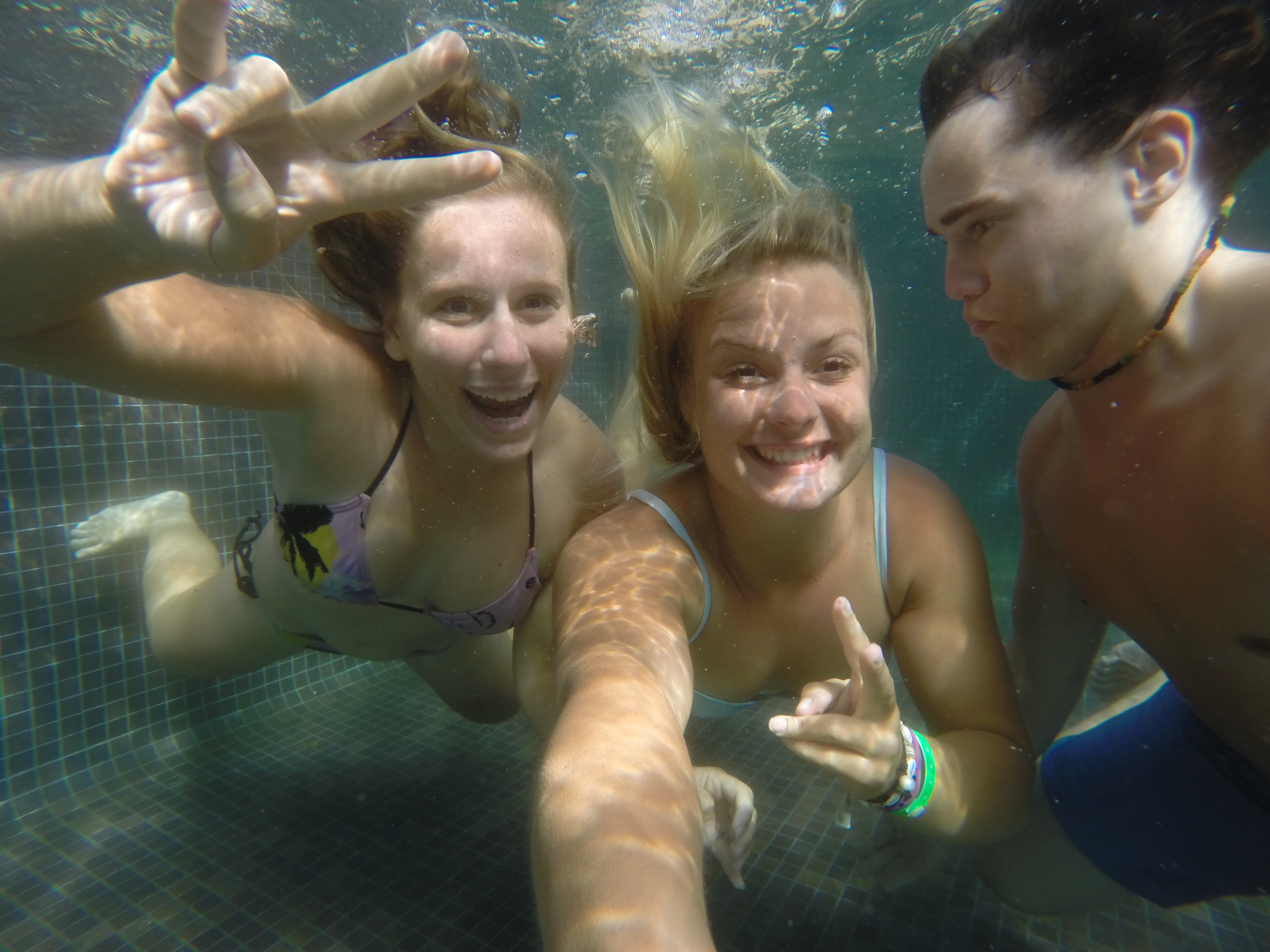 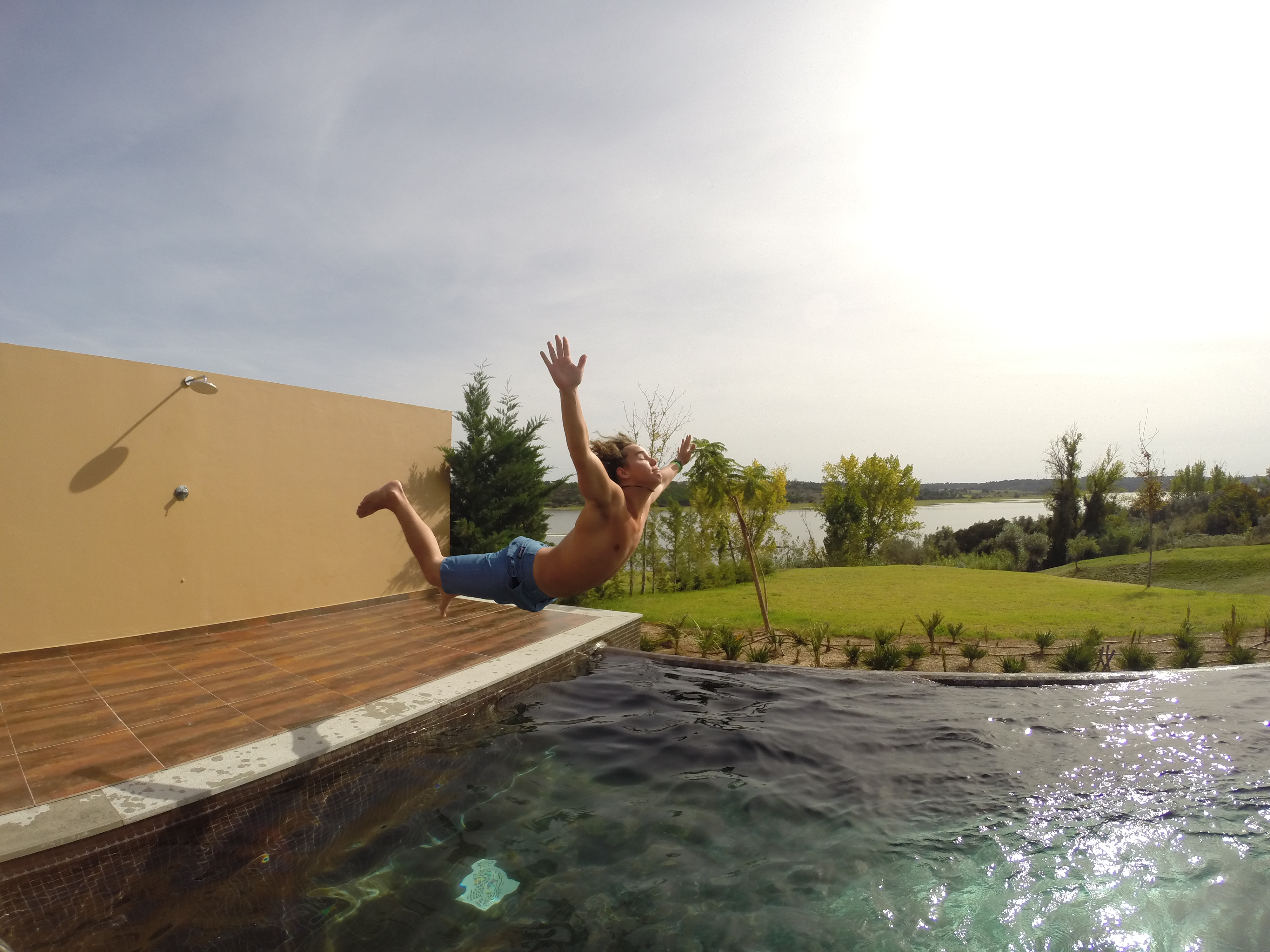 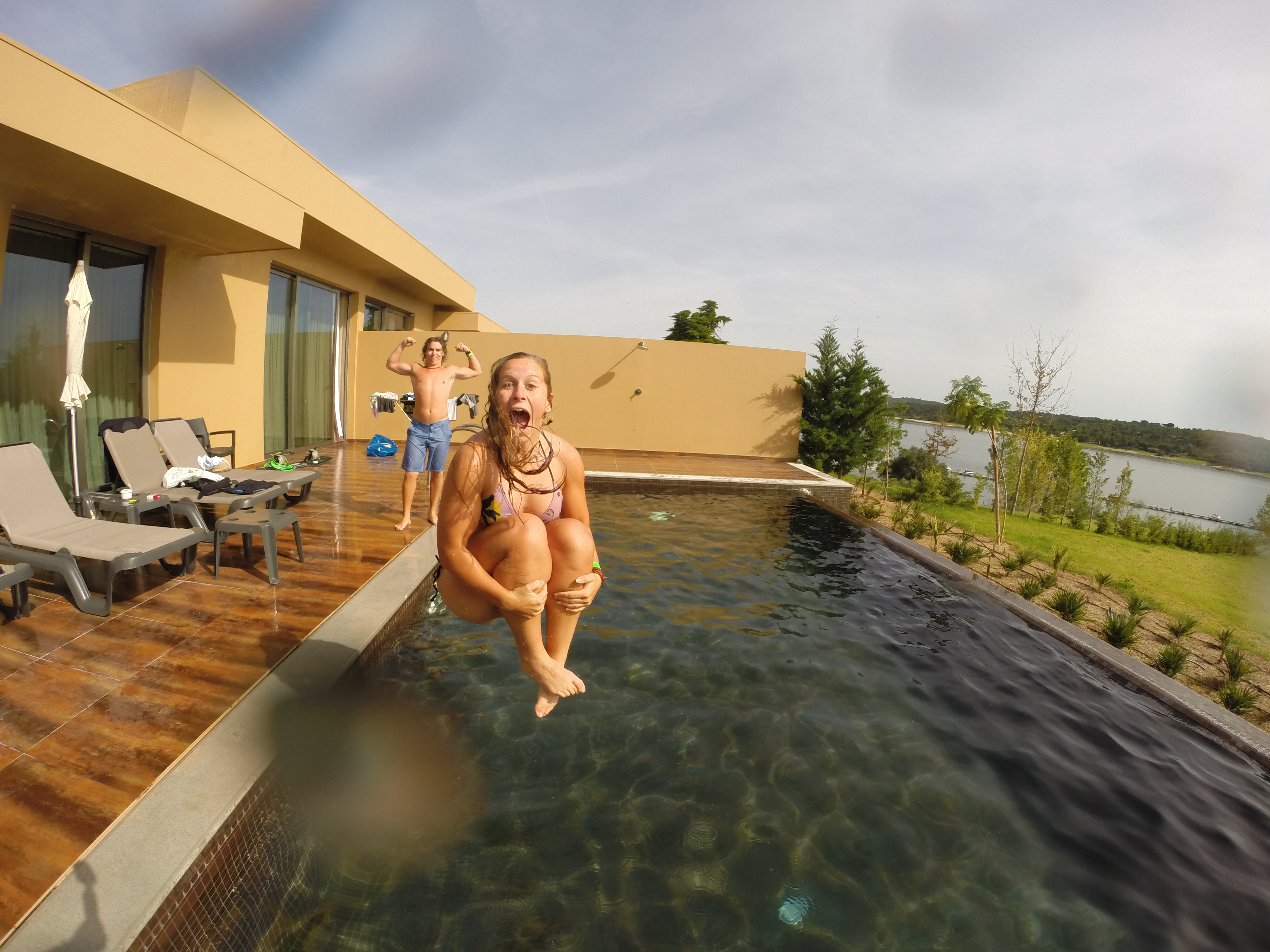 My heat was looking tough with the champions from the two previous years Sian Hurst and Megan Barker along with the Latvian ripper Maija Kučinska.  I know sometimes I can be pretty unpredictable when it comes to contests and that was also the case in the qualification round as I ended up crashing out and not making it through straight to the finals. With a big knot of disappointment in my throat I got back to the starting dock where my team was waiting for me. To not make me feel bad about myself they all decided to crash out in their runs too 😉 So the whole of team Sweden was in the LCQ (Last chance qualifying) on the friday. 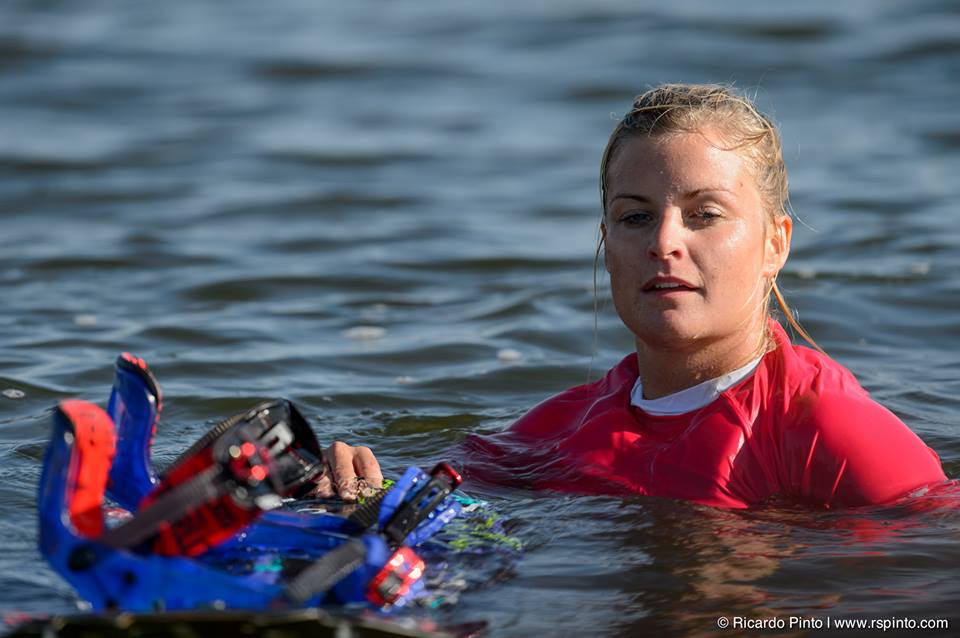 Once again I had that nervous feeling standing on the starting dock but with the encouragement of my friends Lucas and Charlotte my knees started feel a little bit less like jelly and I actually managed to make it through! Unfortunately the rest of team Sweden didn’t even though both Erik and Oscar had great rides. While the rest of Sweden engaged in a “Sweden-Sucks-Party” I called it an early night.

The day of the finals I woke up early, probably an hour before the rest of the team and with my stomach filled with butterflies. After a morning yoga sesh by the pool I headed up to have breakfast (I. LOVE. HOTELBREAKFAST) and since the guys from the Swedish TV-show “Ride” had made it down to shoot the finals I was being chased by two giant cameras everywhere I went. 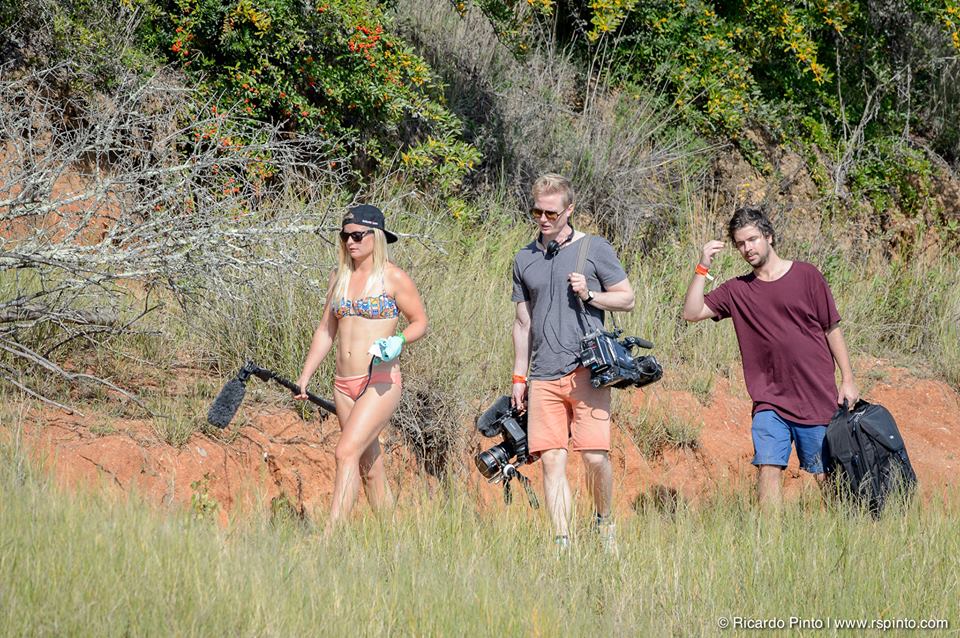 Since I had barely made it into the finals I was first out which is something I prefer as it takes some of my nervs away. Standing on the starting dock with Magnus, the Swedish team captain I had a good feeling about the finals and when I went out and managed to stick my first pass I was thrilled! Coming back for the second pass I think my brain turned off for a second and the tricks just came naturally. I don’t really remember what I was thinking as I was edging in for one of the harder tricks in my book which I knew I needed as the rest of the women’s riders were all so good. As I felt myself come down from the “Moby Dick” and realized I had rode away clean I think a smile hit my lips and I relaxed maybe a bit too much as I ended up going down on my next trick, a toe 5. Trying to get my thoughts together, still with the smile on my face for sticking my first ever Moby Dick in a contest I got ready for my wildcard trick which I ended up landing to big cheers from the Swedish team on shore. I was so happy with my run even though I didn’t know how it would measure against the rest of the riders yet. I landed two tricks I’d never stuck in a contest before and I managed to not let my nervs get in my way so I relaxed and watched the rest of the women hit the water. 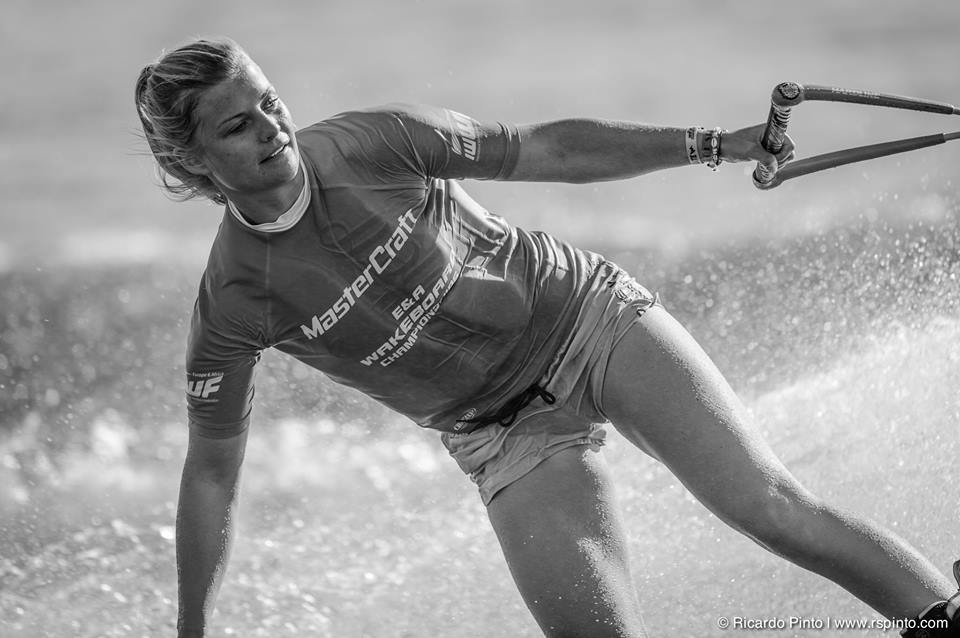 There was one rider who stood out and rode extremely well and that was young Giorgia Gregorio from Italy who landed a toe 5, tootsie and as a wild card threw a clean whirly. I knew it would be tight between us and I tried to tell myself that I’d gotten second as it makes me less disappointed if I already have my mind set on it (yeah glas half empty I know).

We were lucky to have live scoring and while Lucas was updating his phone every 5 seconds I was trying to distract myself, thinking that either way I was really happy with my run and Gina’s had been amazing too. This is when Lucas turns to me and says “I’m so sorry Carro…” my heart stopped for a minute but I could see the lines of a smile in his cheeks so I wondered if…  ” you’re the new European Champion!!!!!!!” 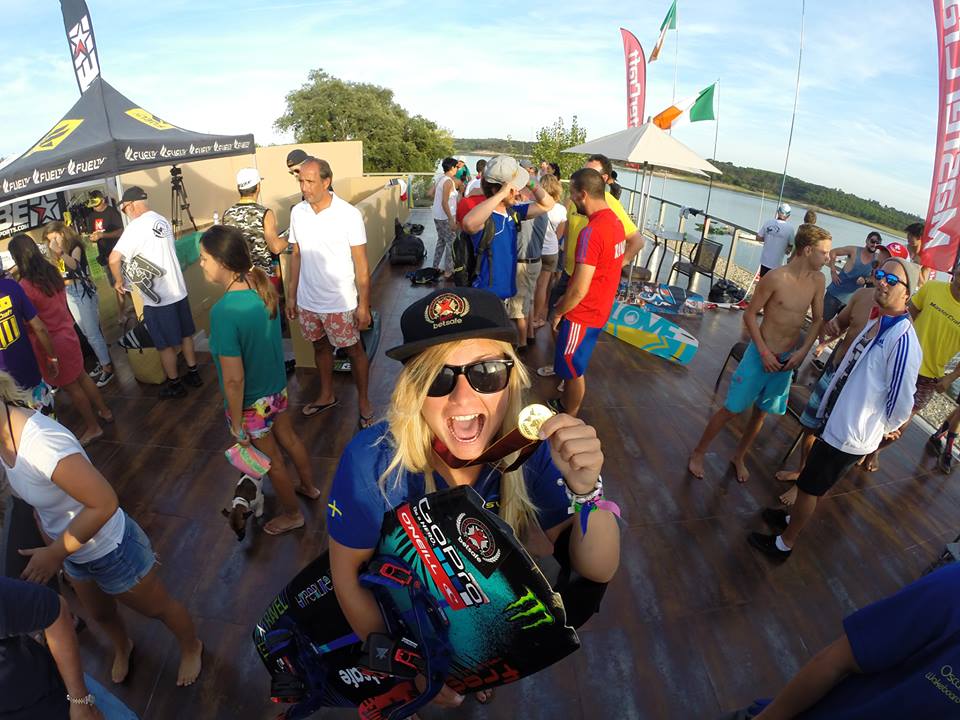 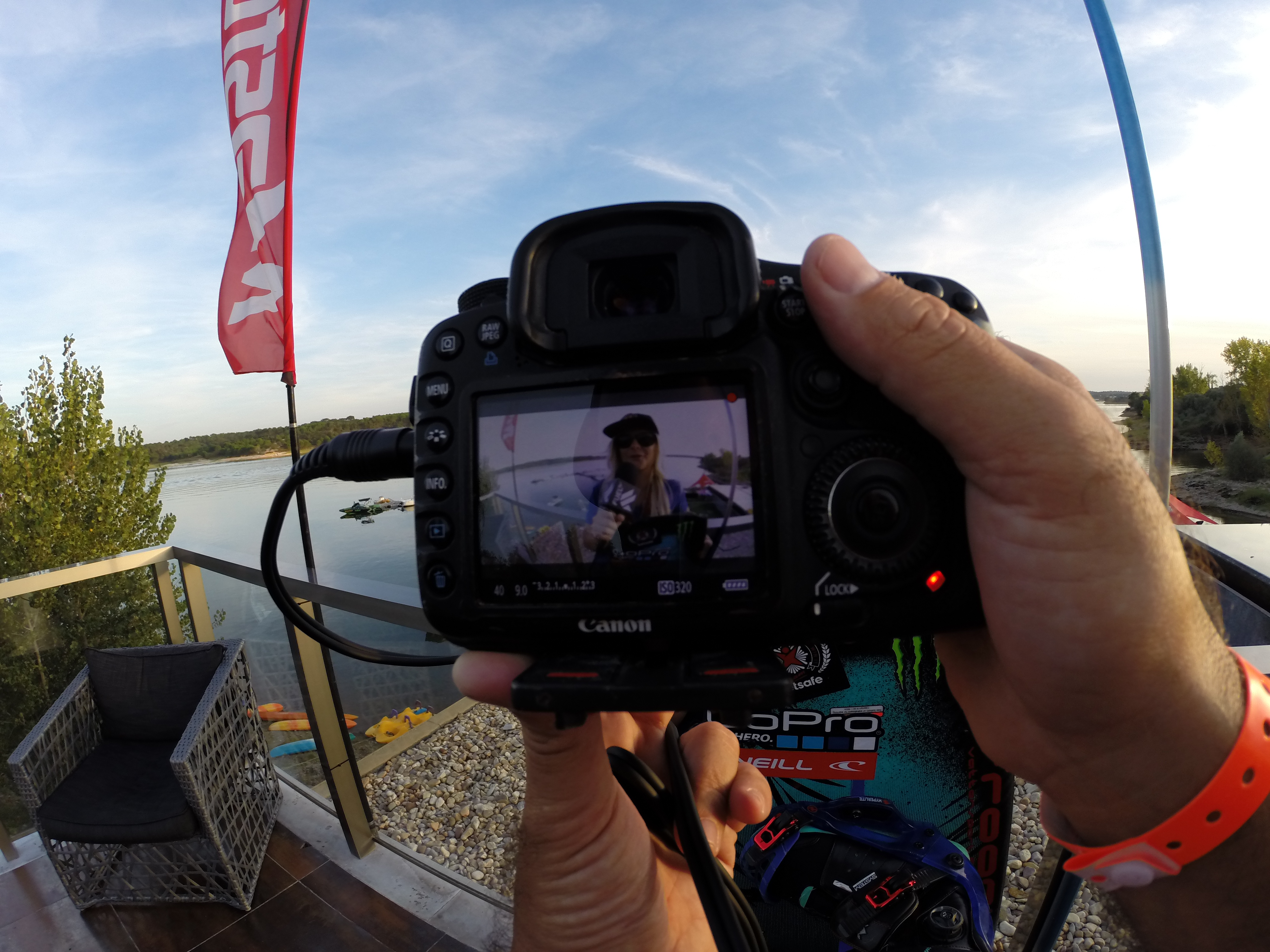 After that my afternoon is a blur of hugs, laughs and butterflies in my stomach. I am so happy with ending this season on a high and I am so grateful being surrounded by so many great people both friends, family, sponsors, organizers, officials and even the teams of my competitors have been so great towards me. THANK YOU everyone for this amazing event and thanks for reading my thoughts, I can’t wait for next year 🙂